By: Charmaine Conrad, Director of Development and Communications
September 2020 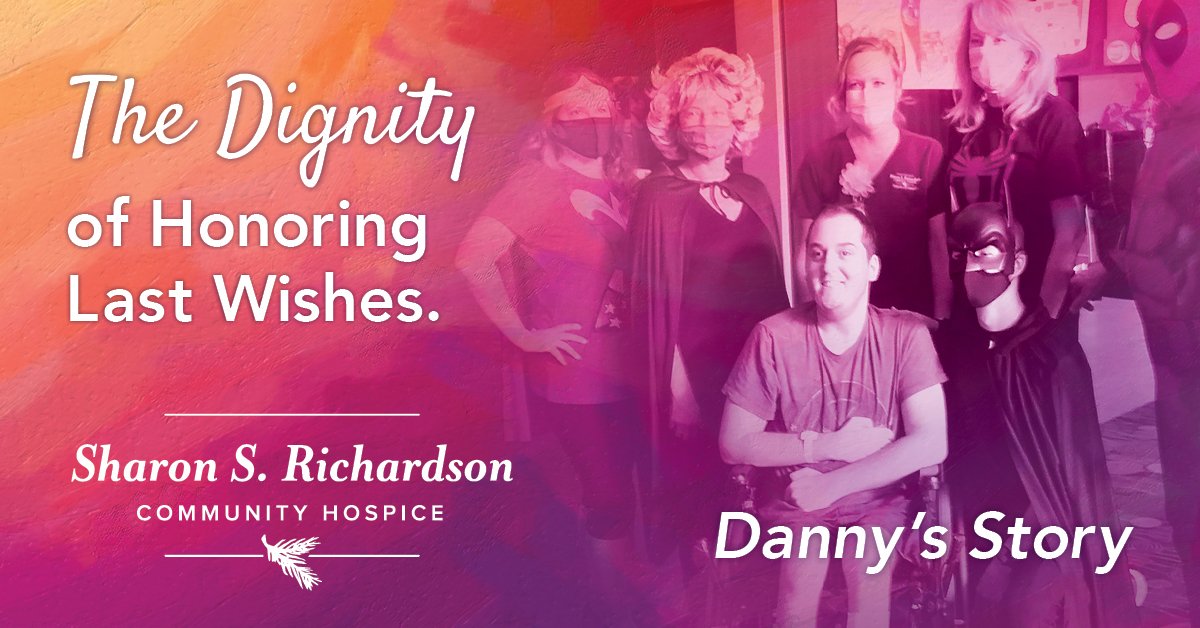 Merriam-Webster defines dignity as, “the quality or state of being worthy, honored or esteemed.”  In hospice, an individual’s dignity is central to their care.  Hospice is not only about the physical aspects of one’s end-of-life journey, but the emotional and spiritual needs as well.

Our philosophy of care became a reality for our patient, Danny Kochan, and his family.  Danny is living with the genetic disease of Ataxia-Telangiectasia (A-T).  A-T is a rare genetic disease that attacks children, causing progressive loss of muscle control, immune system problems and a high rate of cancer, which in Danny’s case is Leukemia.  The life expectancy of individuals with A-T is early 20s.  Danny is 31 years old.

During a visit with Danny, our hospice social worker, Rachel Kummer, asked the magical question, “what is something you would like to do yet?”  Danny’s response, “to see one last movie in the theater.”  You see, Danny is a super fan of DC Comics, Marvel and until recently a regular attendee at Comic-Con dressing up as various comic book characters.

When Danny’s care team heard what he would like to do, they jumped into action.  On August 31, 2020, Stardust Limousine provided a movie-star ride to the AMC Classic 10 Theater, which opened its doors to Danny and his family for a private showing of the newly released “The New Mutants” based on the Marvel comic series. SSRCH team members dressed in costume and just like on the red carpet welcomed him with applause, which brought a huge smile to Danny’s face.

In an interview with the Manitowoc Herald Times, Danny told reporter Tom Dombeck that it made him feel, “special, so special – like a VIP.”  Kathy, Danny’s mom said, “he hasn’t had many opportunities to be singled out, where he’s the star of the show. It was amazing.”

For each person, living with dignity will have a different meaning.  One thing remains constant though, it is how each one of us feels when treated with dignity.  Along with Danny’s family, each member of our team has a treasured memory of that day to cherish.  Because…living with dignity matters.